skip to main | skip to sidebar
Come see what this Dad and his Princess have been up to.
You might get to see some of my sewing projects, as well as a tutorial here and there to help you out.
I might even work up to a few give aways along the way!
Hold on tight! This could be a bumpy ride! 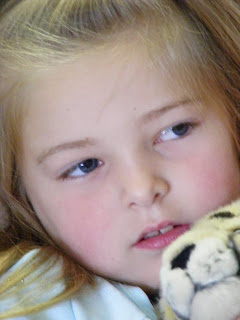 This weekend was spent at Children's Hospital. 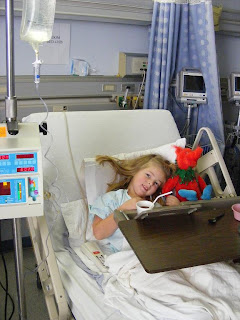 Last Thursday night out of the blue Leighanna started to feel sick. She threw up, complained of a tummy ache, and went back to sleep. She woke up several times throwing up and feeling awful. We thought that maybe she just had a stomach bug and would feel better in the morning.

We gave her some watered down Gatorade, and then some plain water. Nothing would stay down. She was developing a slight fever and started shivering. We tried to give her Tylenol and then Motrin. But even that was too much for her upset tummy and that came up.

By Saturday she said that she was feeling a little better. She still had no appetite, but knew that this was the day to go to Grandma and Papa's house to have Christmas.

She got sick in the car on the way to their house and then proceeded to get sick again once we arrived.

My sister-in-law is a nurse and she could tell that Leighanna was becoming dehydrated. We tried to force the liquids in her, but they would come right back up. She was also getting diarrhea.

We left early, and decided on our way home to see if our local Urgent Care was open. Well since it was Saturday night, they weren't. We headed to the ER.

Once there, it was apparent that she was still sick. The doctors ran a few tests and checked her urine. They ordered a CT scan which showed a slightly inflamed appendix.

Getting an IV into her proved to be very tricky. After several failed attempts and lots of screaming a retired nurse from Children's hospital came in and got one in. 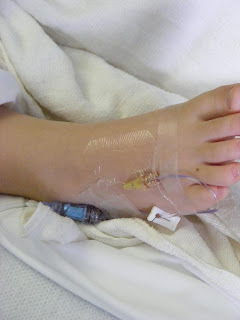 I have never seen so many nurses leave a room in tears before. They hated that they were causing so much pain, and yet couldn't get an IV started.

They told us that she needed to go to Children's Hospital right away and called them to have an ambulance pick her up.

Did I mention that we were getting an ice storm with intermittent heavy snow thrown in between? 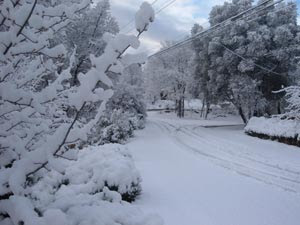 The ambulance finally arrived and got her ready to go. We followed closely behind them, and made it in about an hour. 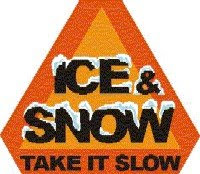 Once we arrived the doctors did an initial exam and thought that Leighanna was indeed having appendix issues. The only thing is that after about an hour, Leighanna's pain on her right side faded and she was starting to feel a little better.

They wanted to do another CT scan with contrast, but since she already was exposed to radiation today, they didn't want to repeat.

They kept the fluids going, and continued to do tests to determine what was causing this.

We were finally admitted, and got a little rest. 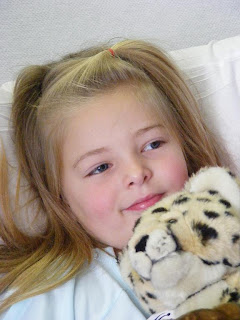 By late in the day Leighanna was feeling much better and had actually wanted something to eat. 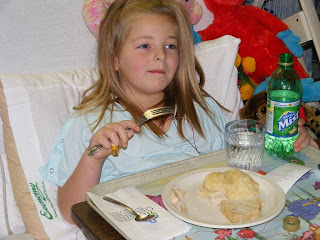 If she was able to keep her food and drink down, we would be allowed to go home!

She kept it down and were dismissed. Yay!

I know that I had a lot of people praying for her. Thank You all!

I am so grateful that she didn't have to go into surgery and face some recovery time! 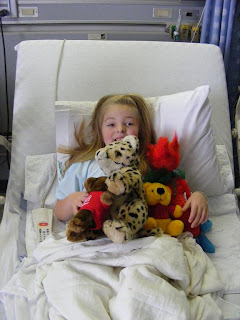 So glad your little girl is doing better! As a parent, I know this kind of thing can make one feel somewhat helpless and just hopeful that something "works" after a while!

BTW - I started following your blog after following a link to it from the Thrifty 50! LOVE your fabric stash!!!!

My daughter was just in Children's by me with a collapsed lung. She came home & came down with a similar bug. Luckily though, since she had just come home, the doctor let us try Gatorade at home & she got better quickly.

Glad you daughter didn't have a long stay. My dd also freaked about the iv & she got to ride an ambulance. I went with her, omg so bumpy!

I am glad Leighanna is feeling better and didn't have to go into surgery.

Oh, poor thing! So glad she is feeling better now!

Poor little girl :( ! I'm so sorry you all had to go through that. Seems like those nasty, nasty bugs always pick the weekends to make kiddos sick, huh? I'm so glad she is feeling better now!

Oh Tom- I am so sorry to hear about Leighanna! How hard that must have been on you all to watch her go through all that. Keep us posted.

Wow Tom - I am so sorry to hear that this happened! That is so scary how quickly that can happen. Your Leighanna is just precious. I hope you and your family are doing well!

What a couple days you all had! I'm glad your princess is on the mend! She is beautiful!!

Tom
I am a Dad to my heavenly blessing, Leighanna. I have been married for 24 years to my high school sweetheart, Angie. We love to travel, especially to Disney World. I sew mostly for my little one, but occasionally make outfits for families traveling to Disney with the Make A Wish foundation.